Remember that scene in Episode 4 of Netflix’s Halston where the famed designer (played by Ewan McGregor) gets into a shouting match with one of his best friends, Italian jewelry designer and model Elsa Peretti (Rebecca Dayan), at his glamorous seaside home in Montauk?

The argument starts with a snide remark from Peretti about Halston’s bourgeois habit of having his lunches flown in all the way from Manhattan, and spirals into a huge falling out in which Halston accuses her of being ungrateful for his help introducing her to the people at Tiffany, where her jewelry line soon developed a cult following.

We know what you’re thinking. Did any of that really happen?

Well, aside from some artistic license on the part of Ryan Murphy, the scene is reminiscent of a real falling out between Halston and Peretti.

Also Read: Halston: Did a Woman Really Die Trying to Sneak into Studio 54 Through the Air Vent?

Bob Colacello, former editor of Warhol’s publication Interview, wrote about it in his book Holy Terror, according to Interview.

“It’s hard to say exactly why Elsa and Halston fell out in 1978, after so many years of being the closest friends and creative collaborators,” Colacello wrote. “He sometimes said that he launched her as a jewelry designer, which was true, and that she dropped him now that her Tiffany line was such a huge hit.”

It’s hard to say whether that argument really took place over a lunch of seafood and slightly cold baked potatoes, but we can daydream.

Vogue confirms that Peretti’s relationship with Tiffany’s was forged in part by Halston.

“In 1974, with the help of her best friend Halston, she brokered a deal with Tiffany’s that made her, arguably, the most successful jewelry designer—male or female—ever,” writes the iconic fashion outlet. “When Peretti renegotiated that contract in 2012, receiving almost $50 million dollars in a one-time payment, Forbes reported that sales of Peretti’s work represented 10% of the company’s net sales between 2009 and 2011.”

And who could forget the scene later in Episode 4 when Halston finds Peretti at a party and demands that she give back the beautiful fur coat that he gave to her? They get into another shouting match in which they exchange some pretty harsh words, and Peretti pours her drink all over the coat in defiance. 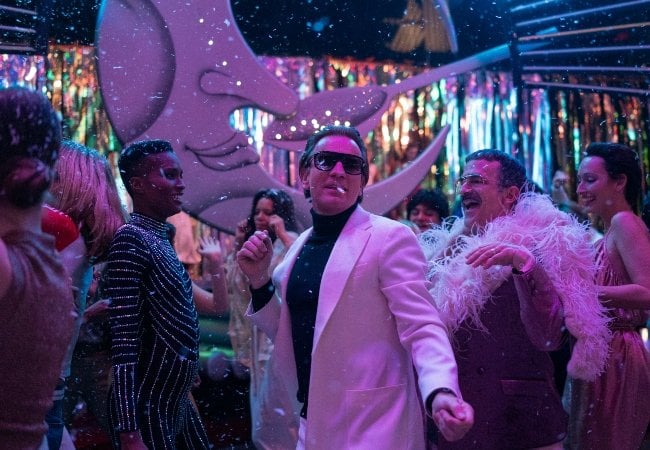 According to Andy Warhol’s Exposures, that scene is based on a real-life fight as well.

In the book, Warhol recalls a gathering at Halston’s house with of his female friends. He writes, according to Interview: “The only one that’s not there now is Elsa Peretti. She had a fight with Halston one night and threw the sable coat Halston gave her for Christmas into the fireplace. That was the chicest night.”

It’s unclear whether Halston and Peretti ever mended their friendship after that fight, although Interview also writes that Halston “continued to kiss and make up with her as the years went on.”

Peretti died in her sleep on March 18, 2021 at her home in Sant Martí Vell, a small village in Catalonia, Spain, according to the New York Times. She was 80. Halston died at the age of 57 of AIDS-related cancer in 1990.

Peretti continues to be remembered for her sleek jewelry designs reminiscent of bones and other natural objects. According to Vogue, her first design, which was a silver bud vase hung on a chain, debuted at Giorgio di Sant’Angelo show in 1969. Soon after, she began designing jewelry for Halston and even got to wear her own designs while walking in his runway show.

All five episodes of Halston are now streaming on Netflix. Main Image: Ewan McGregor as Halston and Rebecca Dayan as Elsa Peretti, wearing the coat that stars in their argument in Episode 4, “The Party’s Over.”

This website uses cookies to improve your experience while you navigate through the website. Out of these, the cookies that are categorized as necessary are stored on your browser as they are essential for the working of basic functionalities of the website. We also use third-party cookies that help us analyze and understand how you use this website. These cookies will be stored in your browser only with your consent. You also have the option to opt-out of these cookies. But opting out of some of these cookies may affect your browsing experience.
Necessary Always Enabled

Performance cookies are used to understand and analyze the key performance indexes of the website which helps in delivering a better user experience for the visitors.

Analytical cookies are used to understand how visitors interact with the website. These cookies help provide information on metrics the number of visitors, bounce rate, traffic source, etc.

Advertisement cookies are used to provide visitors with relevant ads and marketing campaigns. These cookies track visitors across websites and collect information to provide customized ads.

Other uncategorized cookies are those that are being analyzed and have not been classified into a category as yet.